The Environment Is Improving

The crux of modern day environmentalism is that things are getting worse. Today we hear all kinds of hyperbolic claims that without action to eliminate the use of fossil fuels, we’re facing mass extinction. However, not only have environmentalists been wrong for decades, but the environment has improved significantly.

If you think environmentalists are overzealous today when they (falsely) link fracking to serious health and environmental problems, take a look at their long track record of silly doomsday predictions.

Back in 1970, in the lead up to the first Earth Day celebration, environmentalists made a host of ridiculous claims. Harvard Biologist George Wald claimed, “Civilization will end within 15 or 30 years unless immediate action is taken against problems facing mankind.” Life Magazine predicted, “In a decade, urban dwellers will have to wear gas masks to survive air pollution… by 1985 air pollution will have reduced the amount of sunlight reaching earth by one half.” Ecologist Kenneth Watt argued, “By the year 2000, if present trends continue, we will be using up crude oil at such a rate… that there won’t be any more crude oil. You’ll drive up to the pump and say, ‘Fill ‘er up, buddy,’ and he’ll say, ‘I am very sorry, there isn’t any.’”

Despite little accuracy to their claims, environmentalists continued to make outlandish predictions. Environmentalist Bill McKibben (founder of 350.org) warned in the 1980s that “a few more decades of ungoverned fossil-fuel use and we burn up, to put it bluntly.”

Amazingly, these environmentalists are holding strong to their false premonitions. Stanford University biologist Paul Ehrlich, one of the most outspoken doomsday prognosticators, said in the 1970s, “Population will inevitably and completely outstrip whatever small increases in food supplies we make. The death rate will increase until at least 100-200 million people per year will be starving to death during the next ten years.” While that obviously failed to come true, Ehrlich stated that “My language would be even more apocalyptic today” in 2015 than it was decades earlier.

We’ve heard doomsday predictions about mankind and energy use for 45 years. Yet over this time period, we’ve increased our fossil fuel use while improving air quality at the same time. Data from the U.S. Environmental Protection Agency show air quality has improved dramatically since the 1970s. Measures of the six major pollutants: carbon monoxide, ozone, lead, nitrogen dioxide, sulfur dioxide, and particulate matter (PM2.5) have declined significantly over the past decades—even as the U.S. population and its fossil fuel use has increased.

We’ve also reduced our emissions intensity—that’s the ratio of carbon dioxide to economic output, usually expressed as emissions per dollar of gross domestic product. As data from the Energy Information Administration show, the carbon intensity of the U.S. economy has been decreasing steadily since the late 1940s. 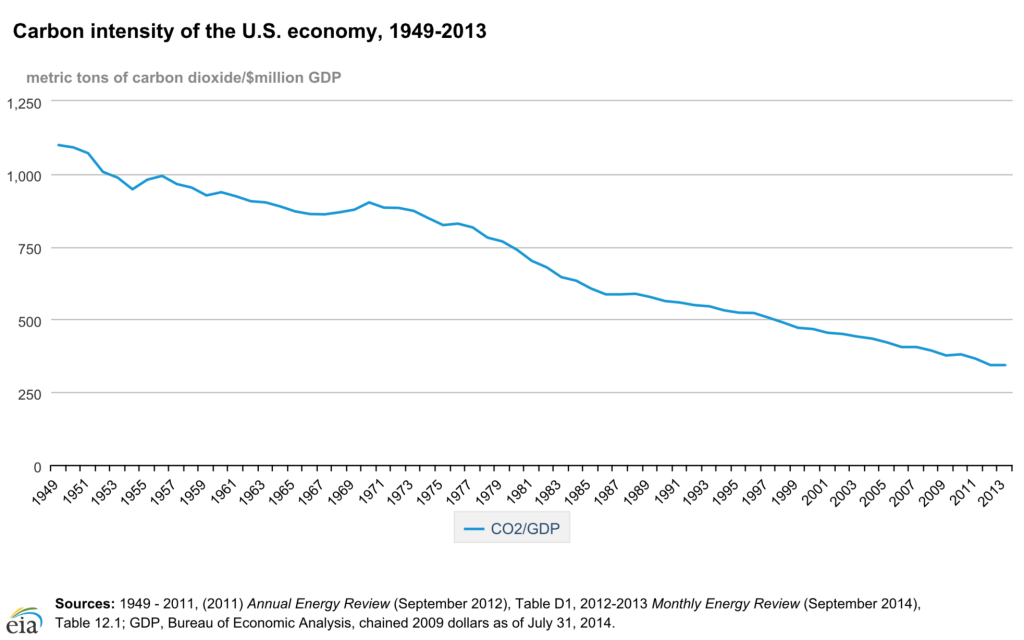 In fact, U.S. energy-related CO2 emissions are at their lowest levels in 20 years: 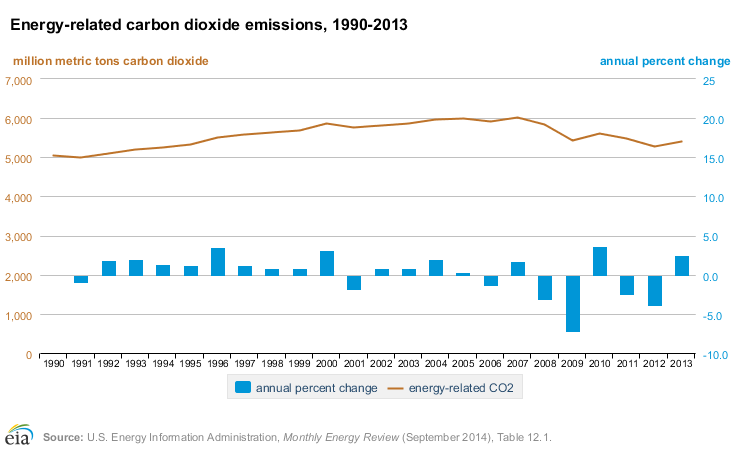